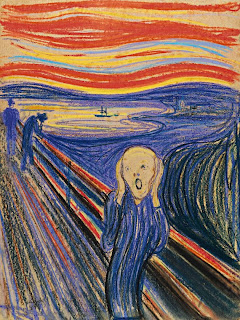 With events of today combining, I have to break my personal rule of one post per week. One of the four iconic "Scream"s of the Norwegian Impressionist Edvard Munch will go on the auction block today at Sotheby's New York and expects to set records. This only seems either ironic and/or tragic when set against the shockingly horrible events of last June in Norway for which Anders Behring Breivik is now on trial.


"The Scream" is a pictorial political commentary of the effect of the modern industrial world on the human psyche. It appears almost ironic that in Norway, a psychotic individual thought it appropriate to murder nearly dozens of people to stop what he thought was a Muslim take over of the country.  Most of his victims were young people at a leadership camp aimed at encouraging inclusion and diversity.


As someone who relishes cultural diversity, I cannot be anything otherwise but horrified and confused by Breivik's actions. I grew up in an incredibly diverse atmosphere and specifically chose my own child's school for its cultural diversity.


I can understand the fear Brevick faced as he imagined his culture was vanishing under an open-arms immigration policy but I see it only as an opportunity to grow. Here in South Florida the environment has changed dramatically within the past ten years. However, if we examine the past when Flagler's railroad hastened the erosion of the Seminole culture that existed here which only developed once US expansion forced them into Miccosukee territory not to mention the thousands of cultures that have been assimilated, decimated and forgotten over the millennia of human existence. Most of these occurred in horrific war-time events. But, we are "civilized", now. We are educated. We are more accepting of our differences....aren't we?


We should take pride in our history, our heritage. Love it, embrace it, share it. But, please, never allow it isolate you and more importantly, never allow it to be a force for hate to grow.

Email ThisBlogThis!Share to TwitterShare to FacebookShare to Pinterest
Labels: 2 May, Munch, Sotheby's, The Scream