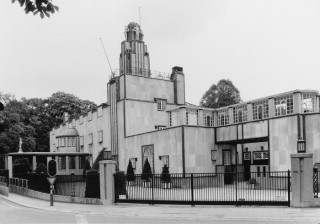 Josef Hoffmann was a cofounder of the Vienna Secession movement with Joseph Olbrich, Gustav Klimt & Koloman Moser as a reaction to the prevailing Historicism movement.  Hoffmann and his compatriots believed "Der Zeit ihre Kunst.  Der Kunst ihre Freiheit." ("To every age its art.  To art its freedom.")  Meaning, they wanted to explore every possibility of art outside the academic tradition which relied on historical examples for influence.  As a result, unlike most other movements, there was no prevailing style associated with it.  He left the group in 1905 due conflicts with other members over the premise of Gesamthkunstwerk (“total work of art”) where a space is simultaneously envisioned in every dimension.  Hoffmann’s best example of this is the Stoclet House in which the interior & exterior architecture, decoration, furniture, functional objects & gardens are all intimately related.   This was a turning point from Art Nouveau and Arts & Crafts Movements which set the stage for Modern Architecture.  Later, with banker Fritz Warndorfer & artist Koloman Moser he established the Wiener Werkstatte where he designed most of his household products. 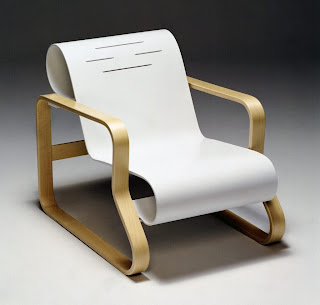 Inspired by the Gesamtkunstwerk ideal, Alvar Aalto perfected the International Style and led the Scandinavian domination of the modern design movement.  Not only did this create exciting examples of modern architecture but also fantastically seemingly simple furniture pieces.  He emphasized organic geometry stating that “Architecture must have charm; it is a factor of beauty in society.”  Two charming pieces are the Paimio chair and three-legged stacking Stool 60.  In conjunction with the design of the Paimio Tuberculosis Sanatorium, Aalto completed a chair that epitomized his theories and showcased his experimentation with wood.  It allowed patients to sit for long hours each day.  According to Aalto, the angle of the back was perfect to allow the patient to breathe the easiest and the slits cut at the neck would allow air to cool naturally.  The looped ends provide springiness and conform to the curve of the knee and neck.  Stool 60 is the finest example of basic utilitarian functionalism; a goal that has been imitated incessantly but never perfected as neatly as this.  An auditorium can be filled and emptied quickly.  The stacking feature keeps storage at an efficient minimum. With all the attention paid to the sale of Finland’s Edvard Munch’s “The Scream” last week, the fact that it was only one item in a collection of pieces that were sold that day and the auction total itself also set another record seemed to be overlooked.  One of those pieces was “Printemps Necrophilique” by Salvador Dali.  Translation: “necrophilic spring”.  Disturbing? Yes, without a doubt.  Unexpected?  From this artist, not even close.  Dali is most notable as the “melting clock guy” but there is so much more of his work that is what can only be described as bizarre yet intriguing.  Dali was so prolific that when one hears the word “surrealistic” an image of Dali’s most likely enters the mind.

Dali’s personal story is equally disturbing as his work.  He was born nine months after the death of his older brother for whom he is named.  Often Dali would refer to himself as the reincarnation of his parent’s first born.  Talk about a confusing childhood.  If I lost a child, my first thought would not be to immediately “make another one just like him”. 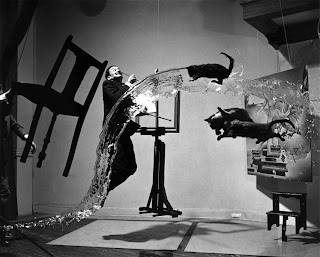 My personal favorite: “Atomicus”, a collaboration with photographer Philippe Halsman in 1948.  It took several attempts for them to be satisfied with the result.  Each time they would chase down the three angry wet cats, dry them and the floor and then refill the bucket of water to try again.  They did this 28 times.  This is perfectionism to the extreme.